Posted on June 9, 2017 by embrujamiento/tangoarchive.com

Ever heard of this combination? Probably not. There are no Google search results at all.

Florindo Sassone was already active with his orchestra during the peak of the Golden Age of tango, but sadly, he left no recordings in that key era. We’ve shown earlier proof of his activities on this website, with Alberto Amor as a singer.

In this case, judging from the image below, Sassone worked together with singer Teófilo Ibáñez at some point in the early 1940s. Ibáñez, with his rough voice, is most famous for being Biagi’s first singer, in 1938 and 1939, after a career as a typical refrain singer in the ”Guardia Vieja” tango orchestras of the early 30s, such as Orquesta Típica Porteña.

Sassone is the man with the somewhat light suit and regular glasses in the middle of the picture, and Ibáñez has a dark suit, standing on the right. 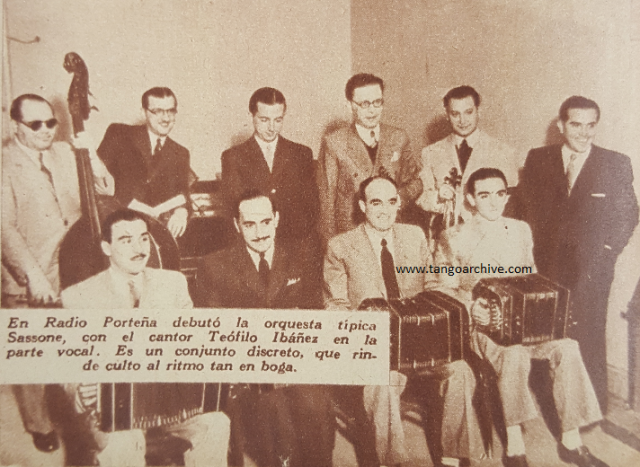