Posted on June 27, 2017 by embrujamiento/tangoarchive.com

There are many orchestras with many great recordings, and sometimes a few stand out (that is, at least, when judging from their extreme popularity in our present-day milongas), but without sources, it would be hard to determine what songs the orchestra leaders themselves preferred.

In the little text below, Francisco Canaro is asked about his favourite own composition. Perhaps to your surprise, ”Pirincho” (his nickname) mentions a rare tango, Sentimiento gaucho, he himself recorded several times, for instance in 1930, 1940 and 1951, yet is probably mostly known to today’s audience as a late D’Arienzo track. In fact, when hanging around at Club Gricel, Buenos Aires in August last year, I heard someone announce that Osvaldo Ramos, D’Arienzo’s last singer, had just died, and as far as I can remember, the DJ played exactly this tango.

In any case, in this little interview Canaro himself explains the inspiration, the motive behind this old tango:
”The streets. The old Paseo Colón, where that bar, called Sentimiento gaucho, used to be located, and in fact it still is. One day I randomly ended up there, in that bar, and a young, ragged man was desperate to share his story with me. Believe it or not, but I listened to all of it, and deeply impressed, I sat down at my piano, and with great ease this tango was born, which won the first prize in the Gran Splendid contest, in the year 1923.”

Sentimiento gaucho is the apparently true tale of a gaucho betrayed by the love of his life. Interestingly enough, the lyrics begin from the perspective of an anonymous narrator, supposedly Canaro, who enters an old bar and finds a poor drunkard, who then confesses his story to him. The article below, likewise, ends like this (first line of the lyric): ”And Francisco Canaro thinks back to that ‘old bar on Paseo Colón, the home of those who have lost all hope…”’ 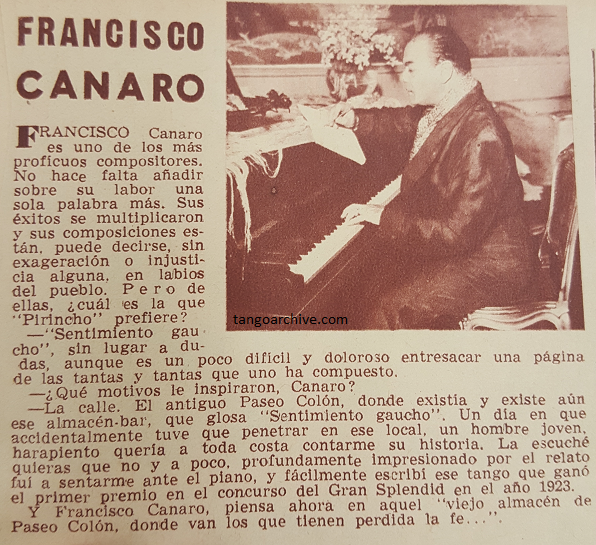