Caló on bandoneon, with Raúl Iriarte

Posted on February 9, 2018 by embrujamiento/tangoarchive.com

Here is a picture of Miguel Caló presumably practising a song with one of his two most important Golden Age singers, Raúl Iriarte, famous for fantastic dance songs like Marión, Nada and Mañana iré temprano, and this distinctive music is still one of the (several) keystones for tango DJs nowadays.

This duo below left us an ample number of highly danceable recordings in 1943 and 1944, when the Golden Age was still going strong and the genre went into a more romantic, dramatic direction. Like in the rival Troilo orchestra, you can hear this gradual change, transition in the recordings: a song like this, Es en vano llorar (No need to cry) from 1943, has a relatively light tone, like several other tracks (not all) from that year, and a relatively clear energy. Just a few years later, the tone has become much darker, and the music is slower and more focused around the singer, like in Fruta amarga (Bitter fruit) from 1945. 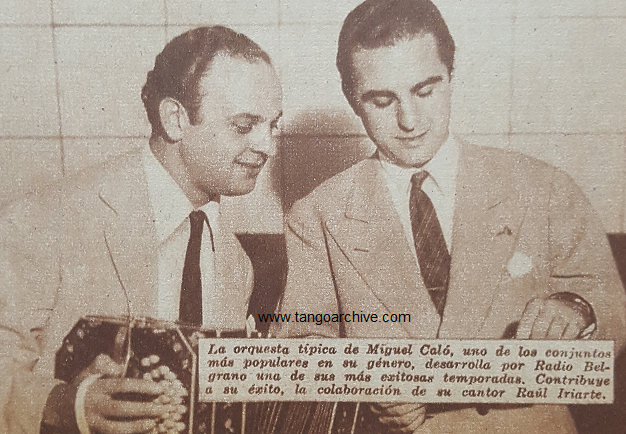