Posted on August 1, 2020 by embrujamiento/tangoarchive.com

Around 1935, like a few other orchestras, Osvaldo Fresedo’s music was starting to become more “mature” in one way or another, leaving behind the more “simple” and traditionally guardia vieja sound of the early 1930s and earlier. Arguably, the recorded music from around the years 1933-1935 (example, example) shows us a transition into the typical “sugary” style of Fresedo that would culminate into the, in my not-always humble opinion, perfect Fresedo dance style we can find from 1936 (example) until early 1939 (example) and that starts to decline immediately afterwards. However, the point of today’s article is not to give a further, broad overview of Fresedo’s career, but to zoom in on a specific aspect of it and provide wider context from there.

One of the main goals of my blog is trying to show the huge gap between, on the one hand, recorded tango music, such as the examples above, and on the other hand, the huge repertoire of unrecorded music that we will never be able to listen to. And yet, there are some clues that can make us at least imagine ourselves how that shadow repertoire could have sounded like. In the little caption below, mention is made of Fresedo’s orchestra playing a song called “La reja” (“the bar(s)”, as in; a part of a window or balcony, giving us the association of a serenade) which, as a matter of fact, has never been recorded and is thus a piece of proof of what we are missing out on. That being said, let’s now find some context for this particular song and for how it could have sounded under the creative direction of a Fresedo on Golden Age Fire. 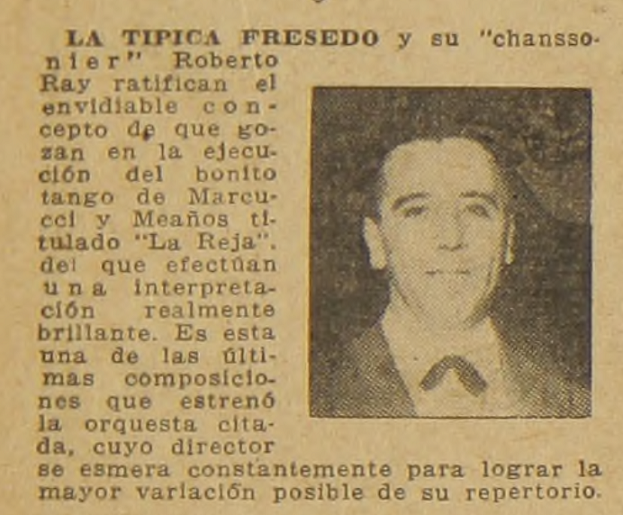 For starters, “La reja” is a virtually unknown tango in the typical style of Carlos Gardel (recorded in 1928). This implies a somewhat melodramatic, yet passionate scene, trying to evoke a longing for the melancholic and nostalgic streets of a Buenos Aires that has remained stuck in time. In other words, a kind of tango that may involve heartbreak, just like many tangos normally do, but also more particularly one that is undeniably tied to the faded glory of that passionate city many of us will always keep yearning for. “La reja” is the tale of a lady who fell in love with a womanizer because of his beautiful, seductive words at her balcony, but, alas, his love was not sincere and she would never really overcome this abandonment.

“La reja” can be included in a loose, but not insignificant category of tangos that tell us life stories from Buenos Aires and its outskirts, stories with themes varying from local Casanovas and tough guys, beautiful women, beggars and prostitutes, to boys playing soccer and young cart drivers with their horse. I personally really enjoy listening to this type of tango because of the whole (nostalgic, melancholic) cultural context that is much more present than in most of the typical lost love songs that only mention ”me” and ”you”, so to say. I am currently obsessed with the lesser-known, violin-orgasmic tango ”Barra querida” by Pugliese and Jorge Vidal (1950) about lost youth, with lines spoken to absent friends from the past, such as ”Come on buddy, let’s get drunk, because I might never be able to come back to my neighborhood, so let’s toast to our gang, which will never return”.

In any case, “La reja” is not a poetically spectacular tango or anything, but it does enrich our image of an old Buenos Aires with its typical characters and tales. And more importantly, it would have sounded amazing as a Fresedo-Ray recording, and because we don’t actually have access to it, we need our imagination to ”create” that sound ourselves instead. To give us some clues about the musical style, let’s listen to the most popular Fresedo song from 1935, ”Isla de Capri”. This tango is quite upbeat, almost nervous, more so than the other Fresedo songs from that year, but “La reja” could have taken either direction, and the Gardel recording is actually quite upbeat as well, in comparison to some of his actual hits. Speaking of those Gardel hits, Fresedo did record one of them in the same year: “Volver“. Like with “Isla de Capri”, Ray is given more space here to sing more of the lyrics than what was possible in the old-fashioned, refrain-only singing (estribillo) that we see in previous Fresedo tangos.

”Volver” is, in turn, quite on the slow side and perhaps a bit too slow or even a bit tedious for most dancers, but Fresedo still did a great job adapting a tango made for singing into a warm, reasonably pleasant song. Anyway, let’s take a look at a third song from the same year, “Pampero“, which is not as upbeat as “Isla de Capri” but less sleepy than ”Volver”, and also has the extended singing new in Fresedo’s style. For some reason “Pampero”, even though little-known, feels like the archetypical Fresedo song before his true, slower Golden Age style set in: it is still quite rhythmical, but what makes it different from the typical older tango music is the affectionate lyricism that is unlike anything ever recorded before in tango music. I like to imagine ”La reja”, our unrecorded song, that way: having a bit of rhythmical emphasis, just like the Gardel recording, but also taking the Gardelian style of lyric and combining that with a lovely, sophisticated musical lyricism that we find to be lacking in both guardia vieja music ánd the mundane, undanceable guitars that usually accompanied Gardel.

However, 1935 also offers two popular Fresedo songs with limited singing (the aforementioned estribillo, a refrain or one part out of three) and of shorter length in general: “No me pregunten por qué” and “Recuerdos de bohemia“. Our lost song could also have been along similar lines, instead of the extended style discussed before. It is impossible to pin down which of these two directions “La reja” took when it was adapted by Fresedo, but it’s definitely worth it to just listen to the examples above and let your fantasy do the rest. In either case, we should try to imagine Ray’s singing as a cornerstone of Fresedo’s new style, which is tonally not unlike Gardel (every singer seems to have seen Gardel as an example) but slower than him in today’s song, which is even true in the relatively fast track “Isla de Capri” as mentioned above. I imagine Ray taking either one part or two parts of the serenade story and singing it with slower emphasis than Gardel did in the recording we have at our disposal.

Just like we’re not able to define whether one or two parts were sung, we cannot know for sure which parts Fresedo would have chosen for his version. The refrain of the song is actually the serenade, the sweet words sung by our ladies’ man, which I personally can’t imagine to have been included without the “intro” before it, the description of the romance that was going on. The strange thing, actually, is that this lyric feels like a complete story that is hard to cut in parts, while most tango lyrics have a third part that is never really sung in dance music and usually feels a bit different or awkward in comparison to the sung parts. You know, this Fresedo song might have even included all three parts of the lyric of “La reja”, as some kind of strange exception to the rule of tango dance music. We will simply never know, we can only guess. It’s more likely, however, that the song had at most 1 minute of singing, like in the Fresedo songs that had more singing than just the estribillo.

Anyway, the only thing still missing in this analysis are other versions of “La reja” than the original Gardel one, and out of the three that are available, the most important one to us is the estribillo recording by Canaro in 1927, strangely enough a year before Gardel’s recording. Why is it important? Because by extension of what was argued in the last paragraph, it shows us that an orchestra director made the actual choice of just taking the refrain that is the serenade, and leaving out the rest of the lyric that might give the listener more context about this serenade. Again, this is what the Fresedo recording could have been like lyrics-wise. The other two versions, very much post-Golden Age songs by José Basso and by Pugliese, are of lesser importance because they include the entire lyric, just like the Gardel version did, but I still recommend you to listen to them, because they do somewhat show what an actual, more modern orchestral version of Gardel’s song would have been like, even though pretty much worthlessly so in comparison to Fresedo’s prime years. And with that said, I hope this little journey helped you realise how certain songs could have sounded like, just with the power of your own imagination.