A ‘D’Arienzo Unknown’? History retold: a case like Mauré and Reynal

Posted on July 13, 2018 by embrujamiento/tangoarchive.com

That’s quite a long text below, huh? But… how about a little game first: if I say ”Alberto Echagüe”, what orchestra will you immediately mention? But had I said ”Juan Carlos Lamas” instead, would your reaction have been just as quick? Well, if you note any difference there… that difference can be explained. Let me guide you into a bit of relevant tango history.

Some of the major tango orchestras had only one main singer at the time, but in others, this key role was shared by two or even more vocalists. Actually, even within one single orchestra, this could change over time, depending on factors like the popularity and/or skill of the singers involved, or the creative choices of an orchestra leader, or maybe just chance and circumstances. Let’s take a brief look at a few examples.

From 1935 to (late) 1938, Francisco Canaro’s almost exclusive singer was Roberto Maida, (click for a gem of a live performance) until Canaro hired Francisco Amor as a second singer and, crucially, he also let a big star, the orchestra’s veteran Ernesto Famá, return. In a music scene so full of rivalries and competition, Maida immediately quit the orquesta. From that point on, Canaro’s discography shows a different pattern: even though Famá was more important than Amor, both singers appear in Canaro’s recordings of those years, and (unfortunately, rarely) even together as a duet. That way, something fundamental had changed in the orchestra.

In the rich landscape of Golden Age orchestras, we see these two different ”trajectories”, so to say, coexist and/or merge all the time. In the case of Lomuto, Jorge Omar was the main singer for a number of years, but was then joined by his predecessor Fernando Díaz, apparently without any real issues. In fact, they also left us a number of interesting duets during various years, and they eventually left the orchestra together, continuing as a team elsewhere (just like Famá and Amor). Donato is perhaps the best example of a duet-rich orchestra, where Horacio Lagos was, admittedly, the most important singer, but essentially shared his post with not one but two other singers.

In the case of Biagi, during his first years we can see a lot of recordings both by Ibáñez and Falgás, but without any recorded duets. After they quit, Jorge Ortiz becomes the singer for a few years, until the old ”shared” pattern returns with (a different) Amor and Acuña. In Troilo’s case, Fiorentino remained the main flag-bearer for many years, just like Vargas in the famous D’Agostino-Vargas combination. However, in 1943, Marino was invited to join Troilo’s orchestra (without much envy, unlike Maida and Famá earlier), and they now had two main singers, who also appear together in a few duets. There are many more examples. Sometimes, orchestras had several singers, but only one of them was actually important, like in the case of Demare. Also, like we just saw, sometimes rivalries got fatal, but other times, things worked out just fine. As you can see, there are quite some variations.

Now, let’s focus on what is arguably the most popular tango orchestra, that of Juan D’Arienzo. From 1938 to early 1940, this orchestra had just one major singer, Echagüe (here’s a live performance for your enjoyment). And after D’Arienzo lost all his musicians including Echagüe, he came up with someone sounding rather similar, Alberto Reynal (left, on the picture below), a tendency which actually wasn’t uncommon. However, at some point in 1940 he also hired Hector Mauré (on the right, below), a young talent with an entirely different kind of voice. And even though Mauré is seen as much more important nowadays, both these singers were able to record an ample amount of songs. After Reynal left the orchestra, someone else joins (Juan Carlos Lamas) with, again, a voice quite similar to Echagüe, who eventually rejoined the orchestra. But in any case, both Reynal and Lamas were allowed to record a great variety of songs, so we can’t really say they were mere secondary singers left behind by one dominant star, like we see in some other orchestras (want an example? Take a look at Demare with Miranda, during that time only a few songs appear with a minor name instead of Miranda).

But then you say, what is really the point of this article? Well, the general idea of some of my earlier posts on this blog is that there is a lot about tango we don’t know, because the recordings we now have are only a part of the actual repertoire of Golden Age orchestras. They were playing live all the time, and probably had to follow the latest trends in their competition with other popular bands. If we follow that line of reasoning, the current discography of D’Arienzo doesn’t show his entire repertoire, and it also doesn’t show any songs that D’Arienzo and Reynal, shown below apparently working on something with D’Arienzo, may or may not have shared together.

Let’s just fantasise and even philosophise about a beautiful vals duet, which is common in other orchestras of exactly those years, like Canaro, Donato and Lomuto. Just imagine a thrilling song like this perhaps including the voice of Mauré too, or a popular recording by other orchestras like this one instead performed by D’Arienzo with Reynal and Mauré at a concert somewhere. Or how about their own version of the following duet? Such daydreams require some true thinking ”outside of the box”, and my reasoning is perhaps merely based on historical speculation, making up (?) things that actually may never have happened. But at the same time, it’s an interesting approach if you want to imagine how glorious the Golden Age of tango should have been for those lucky enough to experience it fully, in person. The recordings we now dance to only allow a limited view of how amazing those times must have been (…even though we are really lucky with how much was saved through recording). And the photographic material I have gathered like the picture below, only attest to how much will be forever shrouded in mystery. 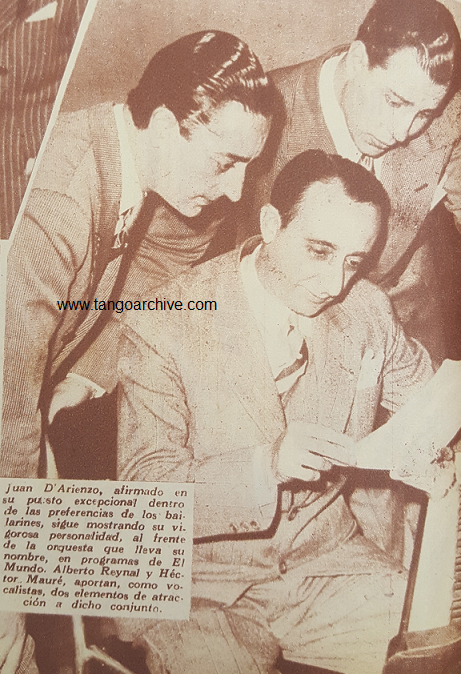 Most of the factual information used in this analysis was based on my own knowledge as a  researcher, tango DJ and collector, but for some historical details and ideas I want to thank Michael Lavocah, a researcher and writer of a number of excellent books about tango history, like his book Tango Stories: Musical Secrets.